The FAA (Federal Aviation Administration - United States Department of Transportation) has issued a rule contained in Title 14 of the Code of Federal Regulations (14 CFR) part 91 which requires Automatic Dependent Surveillance-Broadcast (ADS-B) Out performance when operating aircraft in designated classes of airspace within the U.S. National Airspace System (NAS) after January 1, 2020.

FAA requires pre-flight checks (predictions) to be performed for an aircraft's specific positioning equipment, flight path, and flight times, to make sure that it is compliant with the ADS-B performance requirements in terms of reported position accuracy (NACp) and integrity (NIC). 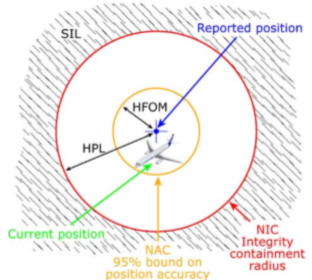 The prediction applies to the US airspace boundaries (only portions of the flight path within US airspace need to be compliant) and uses the predicted availability of the GPS satellites based on the latest GPS Almanac and NANUS (officially published by US Coast Guard service).